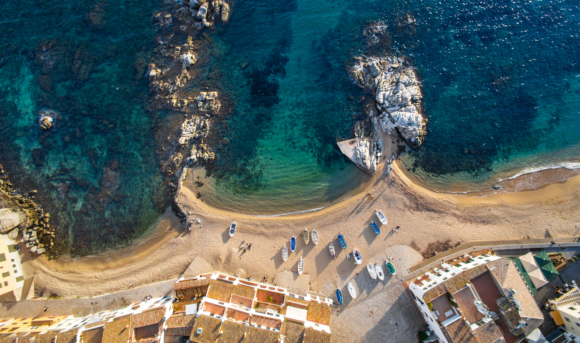 The climate change and the future of the coast

Recently, several studies have warned about the effects of climate change on the Catalan coast. At the beginning of the year, the Government of the Generalitat presented its third report on Climatic Change in Catalonia. The study explained that global warming will affect Catalonia, and the whole Mediterranean, with an average temperature increase of up to 1.4 ºC and a 10% reduction of rainfall. These and other consequences could harm agri-food production, tourism and water supply, in addition to health.

Climate change will have a serious impact on the Catalan coastline. The UPC’s Canal de Investigación y Experimentación Marítima (Maritime Research and Experimentation Wave Flume), associated to the Barcelona School of Civil Engineering, has been used to study the effects of climate change in Catalonia for some time. The Laboratori d’Investigació Marítima (Maritime Research Laboratory, or LIM) is a centre for hydraulic experimentation that has the third most important flume in Europe and the fourth in the world. The large-scale wave flume (CIEM, 100 metres long, three wide and five deep) can generate waves of up to two metres. Apart from the large flume, there are several other experimentation flumes such as the small-scale wave flume (CIEMito) and la bassa, a 12-metre long and 4.6 metre wide swimming pool with a maximum depth of 2.5 metres. A testing space for offshore structures such as wind turbines, marine berthing and anchoring structures, among others. All the facilities belong to the Integrated Coastal Infrastructures for Experimentation and Modelling, which is recognized by the Ministry of Economy and Finance as a Unique Scientific and Technical Infrastructure (ICTS), the only ICTS in the field of Civil Engineering.

The laboratory also carries out research in the field with buoys or at the Pont del Petroli (petrol dock) in Badalona. This is a dynamic coastal infrastructure where, since 2009, the LIM has installed a meteorological station and oceanographic sensors to carry out studies related to climate change, alternative energies, etc. A few weeks ago, the Pont del Petroli became operational once again after a few months of repairs due to the devastation caused by a storm last January, the worst sea storm of the last 14 years in Catalonia. The passing of the storm along the Catalan coast left severe damage and waves of up to 10 metres were recorded. Researchers from the Marine Laboratory of the UPC are testing various engineering solutions to combat the coastal impact of climate change and to prevent those that are currently used from being ineffective in the not too distant future. Thanks to the flumes at the Laboratory, the natural behaviour of the beaches can be recreated. Researchers can not only cause waves, but they have optical and acoustic sensors that allow them to observe the movement of the sand. They are using this to study the regeneration capacity of the beaches which in Catalonia, in recent years, has proved to be less than what was thought.

In Catalonia, the sea swell is not strong enough or constant enough to regenerate them naturally after they have been eroded by a storm. The latest data on the effects of climate change on the Catalan coastline is reported in the European project “Strategies for High End Scenarios-Adaptation and Mitigation, RISES-AM (2016)”, coordinated by the Marine Engineering Laboratory of the UPC with the participation of eleven research centres and universities in the United Kingdom, Holland, Germany, Italy and Romania. The study proposes efficient engineering solutions to issues such as flooding, erosion and sea level rise.

The worst forecasts suggest that it could increase up to two metres on average around the world in 2100. In the Mediterranean, a rise in sea level will occur later, and in Catalonia the most serious effects will be seen the deltas of the Ebro, Llobregat and Tordera rivers, and the beaches of the Costa Brava, the Maresme and the Costa Daurada. Waves are the main cause of the current erosion of the coast and, due to climate change, the damage will be exacerbated by a rise in sea level. The direct consequences will be felt by infrastructures such as railway lines or El Prat airport. Since sea levels will rise and the weather may become more extreme, storms may also be more powerful. This will mean higher waves which will reach further inland.

If solutions are not found, some of the artifi cial beaches of the Maresme and the Costa Daurada may disappear in less than 100 years. The problem with these areas is that the beaches are small and, in addition, the railway is on the seafront. So that a beach can react it must have a considerable coastline and a suffi cient volume of sand. The direction of the waves would not cause damage if the beach was wider, since it would have enough space to reorient itself.

There is a proposal to create underwater dams and natural barriers in front of the most vulnerable beaches and ports, made with rocks and sand but adding sacks of biodegradable tissue fi lled with sand and plants that fi x the sand and do not let it move.

One of the best plants for this purpose is posidonia but it grows slowly and needs very clean water. For this reason, other species that are able to do this function are being investigated, while always respecting biodiversity. Researchers have opened up a debate which requires a decision on what we want to protect from the coast, since it is clear that there will not be enough economic, energy and sand resources to protect everything.